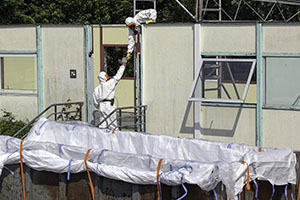 Asbestos, as the name suggests, is a heat resistant material once used in buildings for insulation. Many facilities consist of asbestos. Asbestos has uses in a thermal system, flame retardant, and a variety of other materials. Asbestos like structural components is a mineral that is also used in residential housing for insulation. The main issue with asbestos is that it is a highly contagious mineral if inhaled. People who used asbestos be it simple asbestos or asbestos abatement was prone to inhaling the fibers they gradually drop off.

Asbestos being an effective insulator, it can be used in cloth, papers, cement and plastic, and other such materials to strengthen them. As soon as the human inhales the asbestos fibers, the mineral fibers can become permanently trapped inside the human body, which causes asbestos poisoning.

The most hazardous stage for asbestos is when it is “Friable.” The term friable means that asbestos is easily crumbled by hand, releasing the tiny fibers into the air, which is then inhaled.

* All Fields Are Required

We are providing services in almost all the removal work. Our team is dedicated to working for the removal of asbestos and lead from your home and office. Being a licensed firm, the group consists of expert individuals who can detect the problems and solve them without much hassle.

Our fully licensed experts make the experience great with their asbestos inspection. If you have finally planned to move in or start a new business, an asbestos inspection is necessary. Keeping because of consequences you can have if you do not have an asbestos removal team, you can significantly risk lung cancer and Asbestosis. You will get the complete inspection report and detailed analysis and AHERA inspection.

Contact our staff at TOK Asbestos Removal today for our mold detailed inspection services. Adhering to all the CRC guidelines, you will be provided with all the analysis reports and actions taken to locate your mold problems and recommendations on what to do. When we dive deep into mold inspection, our experienced and seasonal staff can identify specific types of mold and mites. Further recognizing the problem, the team will go into the root of the problem. Do not wait and call our customer service if you think you have a mold problem at your home or business.

If you have a home with mold all over the place, there is no need to worry anymore. TOK Asbestos Removal can remove all commercial mold problems by cleaning and dehumidifying all the affected areas in your home or business place. We provide scrubbing services that can decrease mold growth and use air purifiers to further purify the air and eliminate mold air. Mold services require skills and equipment. Rest assured, you will be getting a partner who will know everything about mold. He will also help you comply with today’s environmental crisis and its solutions.

We provide you with all your lead-based paint inspection necessities. We are offering on-site inspections, setting up certified premium labs, and providing you with results. A safe and sound environment is necessary for your employees and students. Locating and removing the hazardous material from your place is a matter of skills. Our team is dedicated to providing you with the best solutions.

Being a licensed firm, our experts are committed to providing lead removal services. We can help you devise a great plan on what measures to take for the successful removal of lead from your home or workplace. Our team offers a two-hour training course for lead awareness for employees who need to meet AHERA requirements.

Asbestos comes from all over the world, including the top tier exporters like Russia, Kazakhstan, and China. America used to mine this toxic mineral. Asbestos is found in large quantities in other minerals such as talc and vermiculite. The most impressive one of them is the Chrysotile asbestos, which is located in serpentine rock in the form of veins.

Asbestos is a fiber-like mineral that is placed into buildings for different purposes.

Though there are many types of asbestos, some of them used in insulation of the building and for fire resistance, other asbestos has different specification and toxicity levels.Some of them are little to no danger and are found readily, and some have a dangerous effect. The asbestos hazard emergency has differentiated asbestos into two categories, namely Amphibole and serpentine.

Let us have a look at the usage of different kind of asbestos and minerals in various configurations:

The asbestos hazard emergency currently recognizes six types of asbestos minerals. Each of them is in their default habitat.

Also known as white asbestos. A commonly used form of asbestos. It can be in the room, ceilings, cemented walls, and different pipes. Manufacturers use this product in automobiles, brake lining, various gaskets and broilers, and a variety of home appliances for safety purposes.

Amosite is also known as brown asbestos. Just as the name suggests, it is brown. Pipes and cement use this kind of mineral. It’s a standard way of insulating pipes with this material. Amosite is also used in the ceiling and other insulation pipes.

Blue Asbestos or Crocidolite is a popular type of asbestos. It was used in steam engines because steam produces a lot of heat. So, to insulate that hot steam, the Crocidolite was used. It is also used on spray-on coatings and insulation pipes.

This kind of mineral is used in limited quantities for insulation and construction material. It also occurs as chrysotile asbestos and other materials. It consists of grey, white, or dark green.

When is Asbestos Dangerous:

The easiest and convenient way for the asbestos fibers to enter the body is through the nose and mouth while breathing—the Asbestos-containing material. Unless small fibers are in the air, it can get stuck in. The fibers can be inhaled and passed through the nose. These fibers can travel deep down into the lungs and cause lung cancer and diseases like that.

Inhaling the asbestos fibers can cause lung cancer and major diseases like this. Because it is hard to remove the fibers from anywhere, be it carpet or the human body, the body cannot break them down once they are inside. They remain in that place where they can damage the whole body. There are three primary diseases associated with it: namely Asbestosis, Lung cancer, and mesothelioma.

It is a severe non-recoverable disease. The inhaled asbestos fibers aggravate the lungs and their tissues. Asbestosis has many symptoms like shortness of breath and heavy breathing after minimal activity.

Lung cancer is the reason for the largest number of deaths throughout the world. Lung cancer is diagnosed in a more considerable amount in the people who work in mines and mine minerals throughout an extended period. The most common symptoms shown in a lung cancer patient are shortness of breath and coughing. People exposed to asbestos are also prone to be exposed to some other carcinogens such as cigarettes, which are at greater risk of developing lung cancer.

The AHERA granted the U.S. environment to maintain the speed of these six asbestosis. More than 50 countries have banned the asbestos due to the effect on the lungs and other crucial parts of the body. However, the U.S. Bureau of minerals has not banned some of these minerals.

Some of the materials that can harm lungs and severe health problems include winchite, richterite, erionite, and taconite.

Are all Asbestos Dangerous?

While the asbestos is a hazardous mineral, the U.S. department of health and human services has marked all the substances harmful, causing health problems. All the discovered forms of asbestos can cause Asbestosis. It includes severe diseases like lung cancer, ovarian cancer, laryngeal cancer, and some other relevant illnesses.

The most dangerous forms of Asbestos are Amphibole, as claimed by the health protection agency. Both the most hazardous and intermediate conditions of asbestos are banned from using.

Minerals that may contain asbestos come in various geographical forms. Some of the business-minded Asbestos make their unique properties. There are cases too where companies mine their minerals that contain traces of asbestos. Some of these minerals are then processed to come into our personal uses, such as fragrances and powders.

One of the softest known minerals, which is available on earth. This mineral is used in crayons, color pencils, paint, rubber, cosmetics, and whatnot. Even more than that, famous companies use this mineral to make talcum powder. Talcum powder is also known as the baby powder used on babies. Talc has no reason to be banned whatsoever until now.

If you have witnessed popcorn popping in a bag when you put it in the microwave, then connect some dots with it. Exfoliation is the process in which this mineral is popped like popcorn. This popping results in a light-weight material used for insulation of homes and businesses of all kinds. Vermiculite seems like a harmless mineral, without any toxic substances, but it contains the traces of asbestos.

TOK Asbestos Removal provides expert services. We are in the business for about many years and offer a wide range of services for you. We provide exceptional services that are guaranteed and fully insured by EPA and OSHA. Our team is considered leading experts in our field. So even if it is Asbestos removal or any asbestos dangers, feel free to contact us so we can take care of your problems.

Our seasonal asbestos inspection teams have lab work and will inspect every detail with full concentration and leave no trace behind.

Need to get rid of asbestos or lead paint? Do you have mold all over your new home? Contact us for the best treatment of asbestos. Asbestos removal is done with detail and care to get rid of it completely without leaving any traces behind.